Long hours of labor and the frustration of budget cuts and limited space are over!
Posted by Julie at 9:51 AM

Why is water a liquid at room temperature? 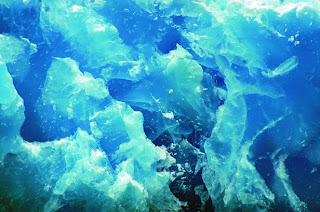 Have you ever wondered why there is nothing else like water on the planet? Many compounds have similar molecular masses: oxygen, nitrogen, sulfur, etc, etc, etc. Water is the only compound in its molecular weight class that is a liquid at room temperature. Why is it so unique?

Because of hydrogen bonds we have lakes and streams. We have capillary action that allows water to climb the trunks of trees to the branches, we have snowflakes, icicles, and icebergs that float on the top of oceans.

Water is amazing.
Posted by Julie at 6:23 PM

This ubiquitous equation is known throughout the world.
People use it as a password to their website, and as a button slogan. I think my high school chemistry teacher made us write it on stickers and put them on our foreheads..... (oh dear)

The ideal gas equation summarizes the discoveries about the behavior of gases into one neat and tiny equation. Let's start with the left side:

This is Boyle. Boyle's law states that the pressure increases as the volume decreases. This is known in science as an inverse relationship: P ~ 1/V.  The best illustration of this is scuba diving. When a scuba diver goes down into the depths of the ocean the pressure increases. (Makes sense when you think of tons and tons of water weighing down on the ocean floor). As the pressure increases, the volume of the diver's lungs decreases. As the scuba diver rises to the surface, the pressure slowly decreases and the lungs can expand again. When a diver gets "the bends" the person swam upward too quickly and did not allow  pressure/volume equilibration to relieve excess pressure. A scuba diver's lungs can actually explode in such a situation. (Like removing the lid on something tightly compressed in a jar- it springs out)

The left side is equal to nRT. Charles's law told us that volume and temperature are directly proportional: as temperature increases, volume increases. Think about the amount of space something takes up when it is moving slowly versus the amount of space it would take moving quickly. This is why you can get a half-filled balloon to perk up by warming it with a hair dryer. The partially filled balloon seems to suddenly have more air (even though it doesn't) when the particles start moving faster.

We also know P ~ T (direct proportionality). Think about the pressure exerted by air in a balloon. Does it exert more or less pressure at room temperature or when heated with a hair dryer? As the hair dryer heats up the molecules inside they move faster and increase their volume. In the process they exert a higher and higher pressure on the walls of the balloon.

Why we can survive carbon monoxide poisoning..... ( read to the end)

My students have been drawing Lewis dot diagrams and predicting shapes of molecules based on their Lewis dot structures. This is a very detailed process and requires them to be familiar with the concepts of valence electrons, types of bonds and bond orders. It is so easy to get lost in all the details. This is why I wanted to stress the importance of WHY. Why does anybody really care about the shapes of molecules. Does it really matter?