About Us: A Book Review 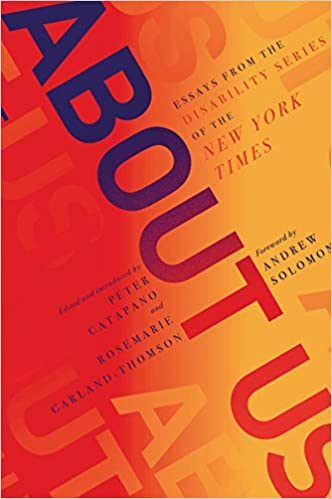 It is obvious that usability and accessibility drive technological innovation and advancement. Not so conspicuous is the source of this usability. For example, many are surprised to hear that the original touchscreen technology of the iPhone was purchased by Apple’s Steve Jobs in 2005 from an electrical engineering student sustaining injuries that interfered with his ability to study and work. Many do not know that the updated kitchen products engineered by the Oxo were the original design of a woman unable to work in the kitchen due to her arthritis. A Nuremberg-based watchmaker, also a paraplegic, created the first self-directed wheelchair which was the precursor to the modern bicycle. Or that curb cuts originated with disgruntled wheelchair users in Berkeley, CA. Later curb cuts became universal because they helped strollers, bicycles, baggage handlers, and anybody else navigating wheels.

It is these inspirational stories with which we can relate and that make About Us: Essays from the Disability Series of The New York Times so relevant to the technical world. And yet beneath the inspirational stories of lifechanging technology, there is humanity—heartache, struggle, alienation, and loneliness. The challenges with daily problems and the striving to maintain an outlook of positivity are also relevant to the technical world.

In this collection, editors Peter Catapano, Opinion Editor for the New York Times, and Rosemarie GarlandThomson, disabled English professor at Emory University, compiled about 60 essays from the New York Times’ groundbreaking series on disability. Their intent was to include a wide variety of people—different ages, disabilities, outlooks, and experiences. Their goal of inclusion is explained, “By ensuring that people with disabilities tell their own stories, we intend to avoid and counter the sort of biased, simplified, often demeaning portrayals of them that are produced by an American popular culture designed by and for the nondisabled” (p. xx).

These essays, first published starting in August 2016, are organized in seven sections: justice, belonging, working, navigating, coping, love, family, and joy. By sorting experiences according to these topics, three overall disability challenges are conveyed: inherent challenges, access challenges, and social challenges. Underlying all this is the idea that the American Disabilities Act (ADA) of 1990, while progressive in many ways, was just a small step forward in necessary changes required for people of all disabilities to be integrated into our society. Mentioned at least twice throughout the text is the offensive 1927 Supreme Court decision in which Oliver Wendell Holmes declared, “It is better for all the world, if instead of waiting to execute degenerate offspring for crime, or to let them starve for their imbecility, society can prevent those who are manifestly unfit from continuing their kind. Three generations of imbeciles are enough” (p. ix). That such a statement was ever made in such a context demonstrates misguided public opinion both past and present.

These first-hand accounts of experiences and obstacles in the lives of disabled people open a glimpse into their worlds. It is through these rare glimpses that we can hope to bridge more of the gap between what the American Disabilities Act aimed to achieve and the realities of change and progress in our increasingly technological world.

Julie Kinyoun Julie Kinyoun is an on-call chemistry instructor at various community colleges in Southern California. An avid reader, she enjoys reviewing books that help her become a better educator.