The billionth of a kilogram effect


Early in the semester, my students invariably turn in a lab done in pencil, or worse yet, a lab corrected with correction fluid. My first reaction is to cringe, then I step back and remind myself that this is an introductory class- they don't know any better.

A lab done properly in pen (without correction fluid) presents data that is traceable. How else would Alexander Fleming have been able to trace his accidental discovery of  penicillin back to the substance he placed on the Petri dish a long time ago?

Accuracy and  reproducibility are two recurring themes throughout science. Another place this theme appeaars is in the Jan 12, 2013 edition of The Economist. Mass Effect describes the efforts of scientists around the world to clean and preserve the kilogram standard. Apparently, it is quite a challenge.

The central standard of the metric system (or Standard international or SI system) for mass is a platinum-iridium block that lives at the Bureau International des Poids et Mesures in Paris France. Unlike other standards of the SI system, it is not a reference to a constant of nature: it is a man-made metal that tends to attract pollutants and contaminants that affect its mass. Therefore, it must be constantly cleaned to keep it at its precise 1 kg mass- the standard of the entire system.

Two researchers in England have recently devised a new way of cleaning this standard to avoid the problems of over scrubbing (stripping away metal itself) and too lightly cleaning its surface (leaving added mass from contamination). They use a combination of ozone and ultraviolet light- apparently a process adapted from the chip-manufacturing industry.

So the problem of accuracy and precision plagues us whether we teach introductory chemistry or whether we maintain the world's standard measure of mass. It is a central challenge in science.
Posted by Julie at 5:30 PM

During my long break from this blog I've been catching up on personal and professional matters of all sorts- cleaning my house, updating my baby gear to toddler gear, preparing my slides/materials for another semester of introductory chemistry, and of course reading my backlog of Economist weekly publications gathering dust on my bookshelf.

Recently my issues of Wall Street Journal and The Economist have been shelved more than I'd like to admit.... however today I dug out my double-holiday issue from December and digested the article on hell.

Hell isn't something I've really thought about much. I do attend a Christian church and study the Bible. In fact, I just finished  Bart D. Ehrman's (James A. Gray Distinguished Professor of Religious Studies at the University of North Carolina at Chapel Hill)   series of lectures about the New Testament (on CD). Notably, there is almost no mention of hell in this series of lectures which leads me to believe the New Testament really does not include a description of hell or a detailed picture of what hell is like.  In contrast, Amy-Jill Levine (E. Rhodes and Leona B. Carpenter Professor of New Testament Studies at Vanderbilt University Divinity School) does mention damnation in her lectures on the Old Testment within the context of Old Testment stories like the destruction of Soddom and Gommorah; but a description of hell as an afterlife is noticeably left out of the Old Testament as well.

The article titled  Into everlasting fire in The Economist focuses on a broad range of illustrations throughout history, both religious and secular, about how hell can be grasped by humans.

Here are some descriptions of hell from various sources that jumped out at me:

"It is a torture-place for the damned in which they are flayed or eaten alive, disembowelled or impaled on stakes, either for incalcuable ages or actually forever." -author of article (unlisted) 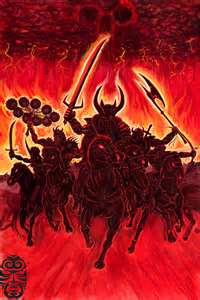 "[Christian hell] ...is an inverted funnel of several layers separated by rocky banks, with each layer deeper and narrower than the last."   - Dante

Buddhist hell: Similar to Christian hell but with many mansions....Hinduism has 21 main Hells and a lakh of smaller ones   -author article


The scientific inaccuracies about hell are numerous: This article points out that the fire of hell needs no fuel nor does it consume what it burns. So- the law of conservation of mass and the law of conservation of energy are defied in a conventional understanding of hell. (Try throwing special relativity and quantum mechanics into that mess- ha!) My students' confusion about the transfer of heat from hot to cold and the equality of heat transferred from one object and received by another colder object also become a mute point. The concept of eternal cold seems to exist simultaneously with the eternal fire- this grossly defies the rules of heat transfer as well.... "The devisers of Hell also realized, however, that continual scalding heat could become routine; so deep snow and ice alternated with the fire."

Hell seems to have no sense of time as well. (Perhaps special relativity relates here more than previously thought.) "Buddhist teachers asked their pupils to imagine a cart loaded with 20 kharis of sesame seed, from which once every century one tiny seed was removed; yet when the whole cartload had gone, they would still be in the first Hell, and thousands of further Hells lay beyond it."

Then we have the concept of light vs dark. Hell's fires mean that it is never completely dark, yet it isn't supposed to be light either. "No light, but rather darkness visible," wrote Milton.

What happens to the body in hell? The body is left behind- pain can no longer touch it. Yet hell seems to imply that there is eternal pain to a vulnerable soul of some sort.

Many more modern descriptions of hell paint a more psychological picture of something beyond human grasp:

Hell means ceasing to hope. - St. Thomas Aquinas
"Hell is the being shut up in the possession of corporeal desires." William Blake

Perhaps the real reason for an understanding of hell is an appreciation for the kingdom of the righteous, or heaven:
"Knowledge of the torments of the damned is part of heavenly bliss." -St. Augustine
There can be no sweetness in heaven  "if there were no infernal descant from God's justice." - St. Vernardino of Siena

The author concludes with a powerful statement that I quote here:\
"Just as there can be no light without dark, and no sound without silence, so everlasting celestial joys depend on a contrast or everlasting horror. Without Hell, you can't have Heaven."
Posted by Julie at 5:11 PM