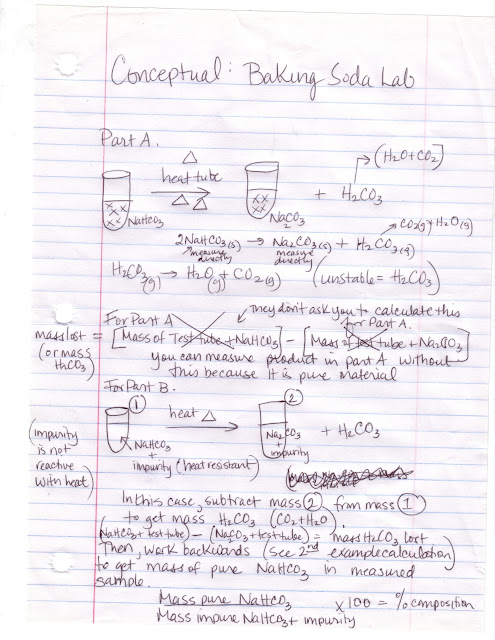 This is a conceptual drawing of the baking soda lab. I love this lab because it asks the students to really think about the concept of molar quantities. In Part A they measure out an amount of baking soda (NaHCO3) [I can't seem to make subscripts in Blogger]. Then, they convert to product using molar ratios/molar masses.  Measuring the exact mass lost in the reaction is irrelevant in this case, because they can measure the pure starting material and convert directly to moles (with molar mass).

In Part B they are unable to measure starting material and convert to moles because the starting material is contaminated with an impurity. The impurity is heat-resistant and unaffected in the experiment. In this section, they must use the law of conservation of mass to figure out how much H2CO3 was lost in the reaction. It is only by subtracting the mass of the (product + test tube) from the mass of (starting material + test tube) that they can find the mass of the H2CO3 produced in the reaction. (H2CO3 is unstable and dissipates as H2O and CO2). From the mass lost, they can find moles of carbonic acid (with molar mass) and then use molar ratios to find the mass of baking soda in the original material. They are asked to calculate percent composition of the mixture. From their original mass they have the denominator of their equation. The pure material is found with the mass of carbonic acid and molar ratios. They divide pure baking soda by the impure mixture and multiply by 100 to get their percentage.

From my perspective this seems to be a straightforward lab. But- if you aren't used to using balanced equations and molar ratios it is a challenge to visualize it. Hopefully this picture helps students understand what is going on in the experiment.
Posted by Julie at 8:33 PM

#Foodchem Carnival: I am most thankful for table salt this Thanksgiving

Last year when I was at home with my young infant daughter during the holidays I watched Lucinda Scala Quinn (on the TV show Mad Hungry) cure a salmon. A properly cured salmon does not need to be cooked because the brine mixture removes any dangerous substances.

This brought back memories of my visit to the Dead Sea Scrolls exhibit in Seattle a few years back. I'm fascinated that the high salt content of the Dead Sea created a sterile environment in which the ancient texts of the Old Testament were discovered. The same chemical that cures a salmon for my dinner created a  preservative in which historical documents survived for a record amount of time.

Initially, neither the salmon nor the Dead Sea Scrolls exhibit seemed all that relevant to my chemistry teaching career. While one is delicious to eat and the other a seeming wonder of the world, the two seemed unconnected to each other and to my academic major .

Except that they both involve preparation and preservation with salt.  And in the nitty gritty of it all, this is really exciting.

What people do not realize is that the word "salt" is a completely different word in science than it is in the kitchen. In the kitchen "salt" is sodium chloride only. You can say "salt" in cooking and everybody knows exactly what you are talking about.  In science, the word "salt" encompasses any compound that contains an ionically bonded species, whether it be a metal/nonmetal combination or some other variety of cation/anion combination. Any neutralization reaction between an acid and a hydroxide base yields some kind of salt (plus water). The word salt is such a general term in science that, by itself, just refers to something that forms ions in solution.

Salts played a pivotal role in the historical development of chemistry as a discipline. The medieval alchemist Paracelsus named salt as a third principle of nature. However, he treated it more as a category of nature and his work became known throughout Europe in the middle of the 1700s. As the chemical behavior of salts became better understood, there was a significant increase in the number of salts known and this resulted in a need for a classification system.  Classification as a method of understanding became a defining characteristic of science in general and of chemistry as a discipline.

Although salts historically include the many, many compounds of the first classification scheme in chemistry, we are exclusively referring to NaCl in the kitchen.

In food preservation and flavoring, salt (NaCl) is used to create a diffusion of water from a lower salt concentration to a higher salt concentration. When this happens we say osmosis occurs. This brings me back to previous posts about polarity, shape and solubility. What is it about salt that causes this to occur? It is ionic bonding.
In solid state, the salt is in recognizable form as a salt crystal. We see these all the time when we pour salt on our food.  In water, salt crystals dissolve to form ions in solution. After salt has dissolved it looks just like pure water- it just has sodium (Na+) and chloride (Cl-) ions dissolved in it.  A pure covalent or polar covalent compound does not separate like this in a solvent. Often my students draw the water molecule as ions in solution (H+ and OH-) along with the sodium and chloride ions. However, this is incorrect as only ionic compounds separate into ions in solution. It is the ions (Na+ and Cl-) dissolved  in water that create a high concentration of salt. A high concentration of sodium and chloride ions in water creates a driving force for liquid to flow in one direction: from lower solute concentration to higher solute concentrations thus drawing water out of bacteria cells and causing them to die.

One common misconception about salt preservation is that salty foods around the house are more likely to be free of bacteria. This is false based on the percentage salt needed to create this effect. The food must be at least 10% salt to kill bacteria (possibly closer to 20%). Most salty foods do not have more than one or two percent salt.

As far as salt's mechanism for flavoring, the salt loosens the tight protein coils so that more water is trapped in the fiber of the meat/fish. This makes the fish juicier.

All of this inspires me to use my newly purchased turkey brine from Williams Sonoma to enhance the Thanksgiving Day meal at our house. Although I will not be adding enough salt to remove all bacteria from my poultry (and thus I will cook it), I will allow more water to penetrate the meat making it juicier and a more delectable meal for all.

And I will have new anecdotal and historical information to share with my holiday guests about salt preservation and flavoring. Salt not only played a critical role in defining science as a discipline separate from philosophy or religion but it preserved historical documents (Dead Sea Scrolls), and flavors our everyday meals. I am most thankful for salt this holiday season. 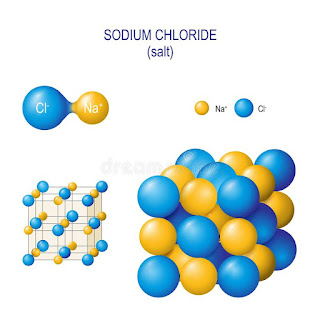 Because I don't want all of my images to be taken from one copyrighted source here on this blog I decided to surf the web for good images of 3-dimensional molecules with polar bonds. I have made my own very clear handout from one particular textbook that I would like to post on this blog but for copyright reasons I will not.

A difficult concept for my students is the determination of polarity based on the difference of electronegativity of individual bonds in a molecule. Out of the four textbooks I've used for this topic in class, only one of them really includes illustrations, diagrams and tables that are effective in conveying this topic with any kind of logic.

(PCl3O)This is a picture of an electron geometry of tetrahedral (four groups surrounding central atom) that also has a molecular shape of a tetrahedral. In many cases this shape is perfectly symmetrical and the individual dipole moments cancel each other out. In this case, the molecule is not symmetrical because the atoms surrounding the phosphorus have different electronegativity values.  As noted, the net dipole moment is pointing toward the oxygen atom and the molecule is considered polar.

(BF3) Boron trifluoride is an example of a trigonal planar electronic geometry that also has trigonal planar molecular shape (3 groups surrounding central atom with 0 lone pairs). In this case, all atoms surrounding the central atom have the same electronegativity values (same atom) and therefore the individual dipole moments of each bond are the same. If we added the sum of the vectors the sum would be zero. Therefore, the molecule has no overall dipole moment and is considered a nonpolar molecule.

(NH3) This ammonia molecule is a perfect example of the tetrahedral electron geometry with the trigonal pyramid             molecular shape. Because of the lone pair of electrons on the nitrogen, the vectors pointing from the hydrogen to the nitrogen sum to be a net dipole moment pointing straight up through the molecule. As noted, the net dipole is 1.47 D with the magnitude shown. This is not a symmetrical molecule and in most cases exhibits an overall dipole moment.
**An exception to the rule that a tetrahedral/pyramid is polar would be PH3. While it has the same shape as NH3 it is a nonpolar molecule. The reason is that there is no difference in electronegativity between phosphorus and hydrogen (calculated difference). Therefore, the asymmetry of the molecule does not matter- there is no dipole.

**02/2013: I received an email from a reader stating that there is a dipole moment associated with PH3. Although there is no difference in electronegativity between the phosphorus and hydrogen, the lone pair of electrons on the pyramid creates an uneven distribution of electron charge.

The water (H2O) molecule to the left is a tetrahedral electron geometry (4 group surrounding central atom) with a bent shape. The two lone pairs are not shown in this drawing. The four total groups (2 bonding and 2 lone pairs) assume the usual tetrahedral structure, however visually only two atoms jut out from the central atom. This creates the bent shape.  The dipole moment of this molecule is similar to that of NH3 in that it points straight up through the molecule. If you add the vectors of a dipole pointing toward the oxygen from each hydrogen, you get a straight line through the center.

The four tetrahedral molecules to the left (variations of methyl/chlorine molecules) exhibit the change of a dipole depending on how many electronegative substituents are attached to the central atom. With one chlorine (far left) the dipole moment    points in the direction of the one polar bond. For two chlorines, the overall dipole points halfway in between the vectors. On the far right, notice that the dipole is 0D. This means that when carbon has four chlorines surrounding it in a tetrahedral arrangement, the individual dipole moments cancel out and the molecule has no polarity. Carbon tetrachloride is an example of a tetrahedral molecule that has polar bonds but no overall dipole moment or polarity.
Posted by Julie at 2:09 PM