There is an article in The Economist this week that helps me understand a bit more about why Carl Zimmer made the error that I pointed out in a previous post.

The article outlines a new explanation for cancer's mysterious genesis and proliferation throughout the human body. Its a similar article to the book review Carl wrote about epigenetics. I don't recall his book review focused specifically on cancer as a disease- it was more of a discussion about how gene therapy and epigenetics could combat a variety of conditions (I would need to reread it to be sure).

The article in The Economist mentions that genes are switched on and off by plastering the DNA or surrounding proteins with chromosomes containing clusters of acetyl and methyl groups. This would explain why Carl mentioned methylation as carbon, hydrogen and oxygen. He merely forgot to mention that the methylation can also sometimes be acetylation. Acetylation does, in fact, include oxygen. So- instead of getting the definition of methyl group wrong perhaps he forgot to include the additional functional group (acetyl). Then, carbon, hydrogen and oxygen would all be involved, as correctly noted in the article.

Glad I got this ironed out. Didn't think Carl was prone to errors.
Posted by Julie at 12:35 AM

Surfactants: How does simple soap work?

I am currently reviewing a book about intellectual property for a trade publication. It specifically focuses on chemistry patents which I know very little about outside of my master's level knowledge of basic chemistry. Interestingly, I have learned about scientific patents in general from my involvement in The Association for Women in Science (AWIS). Several PhD level female scientists have taken the patent agent exam and worked for law firms as patent agents. It seems to be a logical, lucrative and practical solution to the problem of an educated woman in the business world. For some reason the patent/law world is able to accommodate women much better than academia or even industry science is able to do.

Partly for this reason, I volunteered to read and review the book for Technical Communication. This brings me to the focus of this post- surfactants. Apparently surfactants are used to solve a nanotechnology/quantum problem. This is fascinating to me because the two areas of science seem so distant from each other, yet apparently in this case, someone wrote a patent using surfactants for their more electricity/nano oriented problem. (This also gives you an idea of where I get ideas for these posts. Usually I'm reading about something that sparks my interest into writing about a related topic.)

Surfactants help make something intermix with something else. The most obvious example of this is when you are washing your dishes. (Believe me, I'm the queen of DLD right now as a stay-at-home mom- this is coined as DLD or "dinner, laundry, dishes") You have a stack of plates covered in greasy, leftover food. Hopefully, you remove the excess food before you place them in hot, soapy water to wash. Why not just hot water? In most cases, some of the grease is still left if you just wash them in hot water. On a molecular level, here is why:

As you can see in the picture, the left side of the soap molecule is a carbon/hydrogen chain while the right side (the head) has oxygen-containing functional groups. It is these oxygen functional groups that will intermix with the water while the greasy tail (left side) will combine with the grease on your plates.

Here is a picture of nonpolar greasy molecules in the same container with polar molecules: 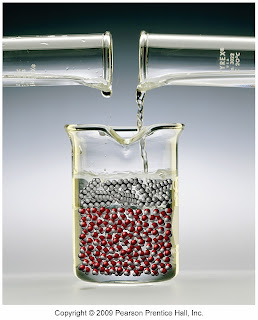 My book likens it to a mixture of magnetic and nonmagnetic particles. Can you think of anything else that behaves this way?

I have discussed polarity and dipole moments in other posts. Here are links:
Electronegativity
Ionic and Covalent Bonding
VSEPR Shapes
Posted by Julie at 1:19 PM