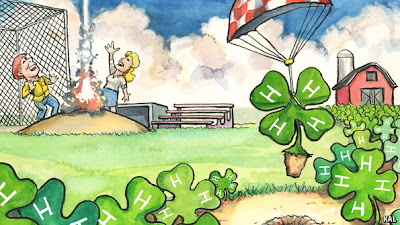 As the daughter of a Nebraska farmer turned city slicker, I watched 4H from afar during my childhood in suburban Seattle. Several of my cousins were involved in the sewing and cooking arm of the organization (yes, the girls- sexist I know) while most of my cousins (male and female) participated in raising livestock, plants, and showing their photography, among other activities. It always reminded me of a girl/boy scout organization or even Indian Princesses- organized crafts and outdoor activities designed to boost character, build the community and promote family unity.

An article in the latest Economist taught me that 4H has historical roots, ties with federal funding and an agenda tied in with the university culture in America. All of this has greatly influenced the way farming has evolved to promote genetically modified (GM) crops, farming as a capitalistic industry and a setup to supply the world's growing food demands. This is very different from the European model of preserving the traditional forces in the market and promoting farm practices which may be more humanitarian but not necessarily capitalistic.

On the surface, you would never know that 4H was founded, in part, to promote the hard sciences. The acronym stands for head, heart, hands and health (all four beginning with "H").  Current science projects with the organization involve egg incubators in classrooms (for urban kids) designed to teach them that their eggs do not originate at McDonald's. The money for these projects comes from government and public universities from gifts of federal land- this was set up during the Civil War and was designed to integrate technology into society. I'm guessing specifically farm culture since this is where the organization seems most active.

The historical origins of 4H are deeply rooted in the drive for new technology and farming practices to be integrated into the rural culture. In the late 1800s, the midwest plains were populated by pioneers - originally of all types of European descent- land was parceled out and homesteaders started their farms. All the while the goal of this distribution was to convert the farming techniques of these newcomers to new and (I'm assuming ) more efficient practices. (This makes sense when you think of the disposition of the average pioneer- already out of their comfort zone by coming to a completely different place) Congress sent representatives out to introduce new ways of planting hybrid corn or canning tomatoes, for example. When resistance from adults prevented new technology from being adopted, the 4H movement began. People were more likely to adopt, for example, hybrid corn, when they observed their children's 4H hybrid corn growing taller and healthier than their own.

All of this history has influenced the overall differences in how Americans view agriculture as opposed to how Europeans view it. In America, agriculture is a commodity- a capitalistic business designed to reap the highest profit possible. This is not the case in Europe where more traditional methods are used, often at the expense of turning the maximum profit or even keeping up with demand.

I had no idea my cousins' childhood pastime had such historical roots and educational goals.