Book Review: A New Metaphor for the Brain 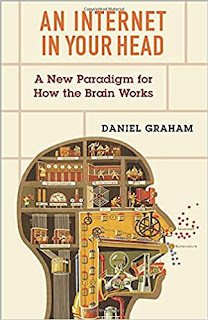 “But metaphors—and especially technological metaphors—have been critical in the history of science, and they will continue to be so as we get closer to understanding the brain” (p. 27). Even before modern technology allowed us to use tracers and imaging techniques on the brain, philosophers and scientists used metaphors to encompass the intricacy and complexity of this critical organ. Seventeenth century philosopher René Descartes likened the brain to the plumbing behind the grand waterworks of the Palace of Versailles—water was pumped uphill from a nearby river—and artfully expelled several meters high on display—delivering more water than was supplied to all of Paris. Building upon this premise, Nobel Prize winner Charles Sherrington likened neurons to “valve-like” structures. Charles Darwin, famous for his work on evolutionary theory, was unable to conceptualize the brain, partly because he had no metaphor for it. He believed thoughts were secreted by the brain, like digestive chemicals. Gottfried Leibniz, co-inventor of calculus, suggested the brain was a type of mill—this suggests different processes operating at different levels. This morphed into the modern-accepted metaphor of the brain as a computer.

In An Internet in Your Head: A New Paradigm for How the Brain Works, computational neuroscientist Daniel Graham argues that although the computer metaphor for the brain is helpful and somewhat accurate, it is ultimately obsolete. Many current research observations and discoveries suggest an organ more akin to a network communicator, or an Internet. “There is no doubt that the computer metaphor has been helpful and that the brain does perform computations. But neuroscience based on the computer metaphor is incomplete because it does not consider the principles of network communication. Neuroscientists are starting to realize that, in addition to performing computations, the brain also must communicate within itself” (p. viii).

Graham cites experimental evidence for the flaws in the computer model: In a controlled study of monkey brains compared with a deep net artificial intelligence system, the deep net system predicts less than half of the neuron activity over time. Besides showing the inadequacy of a deep net, this experimental evidence suggests the system is missing the most important signals occurring in the monkey brains.

For the rest of An Internet in Your Head, Graham provides a comprehensive analysis of the ways in which the Internet does and does not correlate to what scientists currently understand about the functionality of the brain. Flexible routing, asynchronous communication, management of errors, background noise, overall growth of the network (and other phenomena) can all be explained in more depth by an Internet-like structure rather than by a computer. Graham argues that a structure of multiple hubs connected in multiple ways creates a net of communication on many different levels. A problem with his analysis is that some of the vocabulary and experimentation is very specific to the field and an understanding of both electronics and neuroscience seems required to follow all the arguments.

And ultimately, scientists don’t have the ability to experiment with the brain’s inner workings. “Many of the limitations are procedural: it boils down to the fact that living brains, particularly human brains, are difficult to study, whereas single neurons are tractable” (p. 67).